Due to the marketplace failure of the K5, AMD purchased Nexgen to acquire a sixth generation design. K6 began life as the Nexgen 686, but was modified under AMD's supervision to function on a standard Socket 7 Pentium bus. Like the K5 the K6 was heavily based on a RISC design with a CISC front end, and shared at lot in common with Pentium Pro. 32-bit integer performance was indeed competitive with Pentium pro, but it lacked a strong FPU and integrated L2 cache (though it did have a very large 64kb L1 cache). K6 supported MMX, but using a weaker implementation than the Pentium MMX. Despite not being as fast as Pentium II, and even being slower than a Pentium MMX in FPU demanding applications, price and performance were good enough to secure good sales. Initially available in speeds of 166 and 200MHz, there were substantial delays in getting the 233MHz part to market due to excessive heat issues. This was to be rectified in the .25 micron voltage reduced version. Unfortunately, the lower power versions also suffered from production delays by which time AMD was lagging pretty far behind Intel in the performance department. 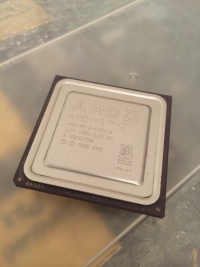