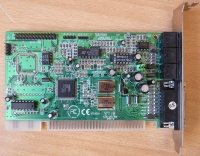 Released in 1995, the Yamaha DB50XG is a wavetable synthesizer daughter card for the Wave Blaster connector. It is compatible with General MIDI and the Yamaha XG standards. The unit features 676 instruments, 16 Parts and maximum 32-note polyphony. It features 2 operation modes: XG and TG300B. The software synthesizer S-YXG50 is very similar to this particular series of hardware, with the 4 MB soundfont possibly being a dump of this card's ROM.

The Yamaha DB60XG is an extended version of the DB50XG, sold only in Japan. In the rest of the world this card is known as the NEC XR385. It is exactly identical to the DB50XG, with two extra analog sound inputs that can be routed through the effects processor. It is rumored that the analog inputs were meant for karaoke or related applications. The DB60XG initializes in TG300 (GS compatible) mode, whereas the DB50XG is in XG mode by default.