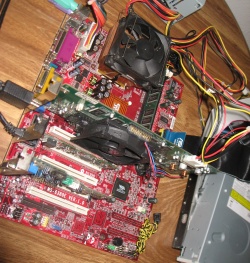 In 1996 Windows 95 was beginning to take over the role MS-DOS previously had as the preferred PC gaming platform, since the release of DirectX made fast paced 2D games more easily programmable for developers. While the OS has a 386 as the minimum requirement, popular games like Diablo and Starcraft had required specifications of P60-P90 systems with at least 16 MB of RAM. A high-end 486 will run these particular games as well. This defines the entry level hardware for a Windows9x gaming build. In retrospect one can say that Windows 98SE is the most refined Windows 9x while still being compatible with earlier versions. It is more comfortable to setup due to Windows Driver Model (WDM), FAT32, AGP, P6, better USB support and other minor enhancements which make it overall more stable than its predecessor.

Most games scale well with faster CPUs, so picking the latest CPU/mainboard components with Windows 9x support usually does not emerge problems. This allows to play most games of the Windows 9x era on one system.

However, it is possible to run Windows 9x on newer hardware, up to some Core 2 boards using Intel 865 or Athlon 64 boards with VIA K8T800. By running such fast hardware, potential CPU bottlenecks are eliminated and there are numerous games that benefit from this. Few Win9x games respond problematic to faster CPUs.

The pool of possible hardware combination could be lowered due to limitation of selected hardware. Voodoo5 AGP requires a 3.3V AGP slot, therefore a VIA KT333 chipset is the top performing choice on an AMD platform.

Matrox cards are often considered good choices as a companion for a Voodoo 1 or 2. They have sharp output.

NVIDIA cards are a somewhat risky choice in that the quality of the boards vary a lot. They are all very fast accelerators, but the output quality varies from blurry mess to razor sharp depending on the manufacturing quality.

Voodoo Banshee through Voodoo5 have high performance GUI accelerators and typically have sharp output as well.

S3 cards such as Trio64 and the various ViRGE chips are adequate GUI cards, but they often don't maintain sharp output at high resolutions.

3DLabs Permedia 2 cards like Diamond FireGL 1000 Pro are often sharp and they are fast. These were low-end CAD cards and so may be likely to have maintained a certain quality level.

The can't-go-wrong choices are the 3dfx Voodoo 2-5 cards. Games from the time were often designed around 3dfx hardware features, even Direct3D and OpenGL games. Glide support is of course very common in games of the day. Some Direct3D games use features like 8-bit paletted textures and table fog which are 3dfx-related features that not all other cards support/emulate.

NVIDIA GeForce 256 through FX cards are good choices too because they support the popular features of the time as TnL. They also have exceptional OpenGL support. Note that RIVA TNT/TNT2 and GeForce 6 lack paletted texture support.

ATI cards are best avoided because they do not support table fog or 8-bit paletted textures.

There are also more exotic cards from the dawn of 3D hardware acceleration. Those cards manufacturers introduced proprietary APIs that some early 3D games have specific support for. Comprehensive overview at Vogons, also integrated into the wiki: List of games supporting proprietary APIs

For PCI cards with best possible sound extension support, typically you should look at Aureal Vortex 2, Creative Sound Blaster Live! or Audigy. Vortex 2 supports A3D 2.0 and some games use it to great effect. Creative cards get you quality EAX support and some games do use that well, and Aureal cards do not emulate it properly.

On the other hand, if 3D sound is of no importance to you, ISA cards can be used for better DOS compatibility or even combined with the aforementioned without problems. Testing has shown that ISA cards do not come with a penalty on framerates in Win9x games, and cards such as the AWE series and some Terratec cards even have rudimentary 3D features.