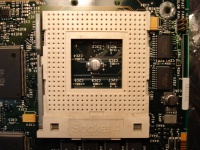 Socket 4 was released in 1993 and was used for the initial Pentium "P5" 60MHz and 66MHz processors. Intel also released two Pentium Overdrive CPUs based on "P54C", operating at 120MHz and 133MHz. There are no other CPU options for this socket without the use of VRM adapters such as Powerleap PL-54C/MMX. Intel quickly abandoned Socket 4 as the 5V Pentiums produced an excessive amount of heat. Usually Socket 4 motherboards have ISA and PCI slots, though most of the earlier models have VLB or even just ISA. Socket 4 motherboards typically use 72-pin SIMM FPM DRAM modules, but sometimes supported 30-pin memory as well. Most of the time 72-pin memory is fitted in pairs if the motherboard uses a 64-bit memory bus, however some of the earlier chipsets from OPTi were crude reworkings of their 486 chipsets that still used 32-bit data paths. These motherboards allowed SIMMs to be installed one at a time, but were best avoided due to their poor performance.

Today: Socket 4 is an uncommon choice because the boards and CPUs were produced in quantities much smaller than their 3.3V cousins, and configuration options are extremely limited. The old chipsets used for it are also drawbacks.