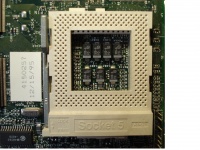 There are several CPUs from companies other than Intel available for Socket 5. The Centaur/IDT Winchip and the AMD K5 are perhaps most well known. There are also several Intel Pentium Overdrive CPUs that were produced to match Socket 5 options to later Socket 7 CPU clock speeds.

Socket 5 motherboards are built to the AT specification, and typically use PCI and ISA slots. Some with OPTi chipsets have VLB slots as well, and some have onboard audio or video.

Socket 7 brings optional "split-rail" voltage support, which is required for CPUs that use a core voltage different than 3.3v IO. Initially the socket was used with "P54C" Pentium CPUs that went to 200 MHz (motherboards from this period typically do not support split rail CPUs), and later the Pentium MMX "P55C" that went to 233 MHz. Socket 7 boards typically support 60 and 66 MHz bus speeds, but many motherboards allow a wider range to support some non-Intel CPUs. Alternative CPUs include products from Cyrix/IBM, AMD, Rise and IDT/Centaur.

Socket 7 motherboards are available in AT and ATX form factor. They have PCI and ISA slots. Some have extra onboard components like audio and video.

ETEQ chipsets are Via chipset relabeled by motherboard manufacturer Soyo.

Super Socket 7 is an AMD creation. They modernized the Socket 7 platform with AGP and 100 MHz bus support for their K6-2 processor. Intel was not involved with this nor did they produce CPUs specifically for it.

Chipsets were produced by ALI, VIA and SiS. The boards come in AT and ATX form factors and usually have AGP, PCI and ISA. Some boards use integrated graphics and forgo the AGP slot. Usually Super Socket 7 boards will come with sockets for SDRAM.

These solutions competed against Intel Celeron and Pentium II.

Today:Super Socket 7 (and to a lesser extend the ordinary Socket 7) is a very popular base for a retro computer build, not only for nostalgia reasons but also for it's great flexibility when it comes to CPUs. Basically any Socket 5 and Socket 7 CPU will be compatible with Super Socket 7. Not only was this the last (and fastest) platform available where both Intel CPUs (Pentium 1 MMX) and AMD CPUs (K5 and all K6 variants) were compatible with, but also some of the more obscure CPUs like Cyrix 6x86 and MII, Rise mP6 and the Winchip CPUs. Another big advantage is that usually CPUs for (Super) Socket 7 didn't have their multipliers unlocked, which adds even greater flexibility.

Many of the later Super 7 boards were made in ATX format instead of the older AT format which makes building a Super Socket 7 based retro rig a lot easier and as Socket 7, Super 7, Socket 370 and Socket A share the same CPU socket dimensions, many more modern CPU coolers are (in theory) compatible with Super 7 motherboards.

Super 7 has some disadvantages though, mostly because of it's relatively lacking performance compared to contemporary Slot 1 counterparts. Many Super 7 boards will have lots of motherboard components directly around the CPU socket, making installation of a larger CPU cooler more difficult. Super 7 can also be quite tricky to setup, partly due to the many jumpers required to correctly setup the installed CPU and partly due to some motherboards requiring a BIOS update before certain newer components may work correctly (particularly support for larger harddrives and the K6+ CPUs). Another disadvantage is it's relatively lacking AGP support, which makes adding more modern AGP cards more of a challenge, though this isn't as much of an issue compared to Slot 1 based systems due to it's relative lack of performance compared to CPUs like Pentium 3. The AGP issues is one of the reasons why 3DFX cards are often seen as a good match for a Super 7 system, partially because cards like Voodoo 3 use fewer AGP features, which also means there are fewer things that can go wrong.