The ZIP drive (known for its click-of-death) was one of the media formats that was supposed to succeed the 1.44 MB 3.5" floppy format. Ultimately, none of the next generation floppy formats caught on and they were replaced with first CD-R(W) and then USB flash disk media.

Zip drives initially supported only 100 MB disks, but later generation drives supported 250 MB and eventually 750 MB formats as well. However, the larger formats never attained the same level of popularity as the original 100 MB drives, mostly due to compatibility issues and damage to the brand image caused by the click of death.

Many variants of the Zip drive were produced (ATAPI, SCSI, parallel and USB).

Like many other floppy and superfloppy drives, the later drives sometimes lost compatibility with earlier formats (notably 750 MB drives being unable to read/write 100 MB media). 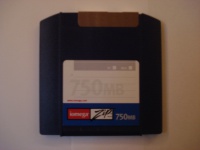