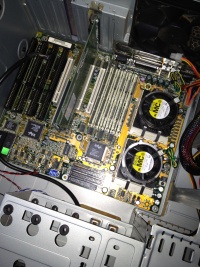 Socket 8 was introduced in November 1995 and is the initial platform used for the P6 architecture, the Pentium Pro CPU. It was primarily used for workstations and servers, and mostly ignored by home users. Motherboards and the CPU itself were pricey, and Pentium Pro is not necessarily a significant improvement for typical home user applications. In the worst case, running 8/16-bit code, the PPro can be slower than a Pentium at the same clock speed. In the best case with 32-bit code or heavy FPU operation, it far outperforms Pentium.

For gamers the PPro was an exciting development. Its various improvements were highly beneficial for emerging 3D games. It can occasionally outperform the bottom Pentium II models.

The initial chipsets, 450KX/GX, are not ideal for gaming because of PCI deficiencies. It is best to use a later 440FX-based board. It is also a good idea to try the FastVid utility when playing SVGA DOS games because PCI throughput can be dramatically improved. Windows 9x video drivers usually take care of this though.

Slot 1 was introduced in May 1997 and served as Intel's successor to Socket 7 and brought the P6 architecture to the home market. CPUs come in a cartridge which contains the CPU chip, cache chips and a cache controller. Later CPUs like Celeron "Mendocino" have on-die cache and thus the cartridge became unnecessary and so Slot 1 was replaced with Socket 370.

Intel 440FX was the first Slot 1 chipset. It was originally designed for Pentium Pro and there are boards with both Socket 8 and Slot 1. 440FX lacks AGP, SDRAM support, and its IDE interface is limited to 16MB/s.

440LX introduced AGP, SDRAM support, and UDMA33. It still has a 66MHz FSB limit. The fastest CPU's that will work are the Pentium II 333MHz (or a Pentium II 400MHz downclocked to 366MHz), the Slot 1 Celeron 433MHz (though faster Celerons can be installed with the use of a slotket) or a downclocked Pentium III with the Katmai core (which will be recognised as a Pentium II usually by the BIOS). Other solutions are to use a special type of slotket that lets one use a Tualatin-core Celeron which will be underclocked also, but will provide a speed up to around 1000MHz. Some of the 440LX motherboards had issues with powering more modern AGP graphics cards.

The 440BX is an evolution of 440LX and was very popular. BX boards officially support 100MHz FSB, though many motherboard manufacturers feature other FSB speeds for overclocking. BX also supports up to 1GB of SDRAM.

There are some other chipsets that feature Slot 1, the i820 chipset and several VIA chipsets. The i820 chipset is designed to support only RDRAM and only 1.5v AGP, although some motherboards feature special RDRAM to SDRAM bridge chip. Using the bridge significantly affects memory bandwith and overall performance. VIA chipsets tend to be less stable but have some advantages compared to BX because some feature AGP 2/4x, 133 MHz FSB and support for larger SDRAM memory modules.

Most Slot 1 boards are made in the ATX form factor but some AT versions have been made. 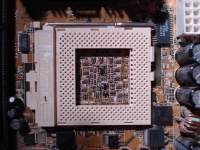 CPU socket for Intel and VIA Socket 370 type CPU's

Introduced in January 1999, Socket 370 was originally made as a budget CPU socket. Later it became Intel's main CPU Socket until the release of the Pentium 4, after which it moved to the budget end of the market again before being phased out altogether.