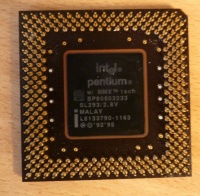 The first chipset released by Intel for socket 7 was the 430FX in 1995, codename Triton I. It introduced a new Southbridge chip called PCI IDE ISA Xcelerator - PIIX that included the functionality of several common I/O interfaces, including a PCI to ISA bridge and an integrated Dual Channel IDE controller. The 430FX chipset caches up to 64 MB DRAM and supports PCI 2.0. For later Pentiums 430FX based boards usually require a separate voltage regulator plugged.

In 1996 the Triton II chipset 430HX followed. It was targeted for professional users, supported tighter memory timings, SMP and is able to cache up to 512 MB. This usually requires a Tag-RAM upgrade. It features an updated PIIX3 southbridge, that has PCI 2.1, USB 1.0, Busmaster DMA support for IDE transfers and independend IDE drive timings. Due to the lack of USB devices at this time board manufacturer often left the USB connector unsoldered.

The Consumer version of the Triton II chipset was introduced at the same time and called 430VX. While it also used the PIIX3 southbridge, it did not support SMP and could only cache up to 64 MB. The main difference is the support for SDRAM.

Finally in 1997 Intel released its last chipset for the socket 7 platform, the 430TX. The chipset was consumer oriented and supported FPM/EDO/SDRAM while still keeping the cacheable area at max. 64 MB. The southbridge got replaced by PIIX4 that added ACPI and UDMA/33.

Overall all Intel chipsets are easy to setup and supported directly by Windows98 up to Windows XP. Later chipsets offer better performance on average due to increased internal buffers. If more than 64 MB should be equipped the 430HX chipset sticks out as the only option where the RAM is covered by the L2 cache. The speed gain from using SDRAM compared to EDO is in the range of a few percent, same goes for the upgrade from 256 kB pipelined burst cache to 512 kB by using a COAST module. As Intel left the Socket 7 platform with Pentium 233 MMX all chipsets support a FSB of 66 MHz maximum. Board manufacturers often offered higher multipliers for CPUs that allow to use faster CPUs like a AMD K6 on these chipsets. Of course higher power consumption of faster CPUs should be considered, since a lot of boards with Intel chipsets use simple linear voltage regulators.

It's a common mistake to load up 430FX, 430VX and 430TX chip sets with maximum amount of memory available for the board. With these chip sets, the use of more than 64MB of RAM results in a significant performance drop, as anything over 64MB runs uncached. To avoid this, either remove extra RAM, or change motherboard for a 430HX based one. Some chip sets from other manufacturers are also known to cash more than 64 MB RAM. 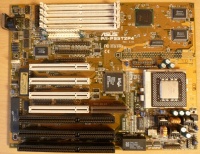 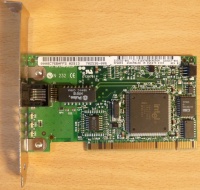