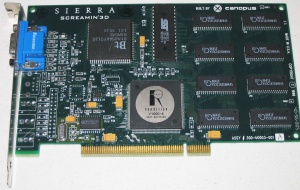 Released in October 1996, V1000 was one of the earliest chips with 2D, 3D and video functions all integrated into one ASIC while also providing impressive performance all around. It still used an external RAMDAC, which was common at the time. The GUI acceleration is adequate but not exceptional. DirectDraw and VESA VBE 2.0 functions are fast. All V1000 cards are equipped with 4MB of EDO DRAM running synchronously with the graphics chip.

Legacy VGA modes are very slow. For example Doom, which uses VGA Mode X, will run at around 10 fps on a Pentium III. There is a DOS utility program (renutil) to remap some VGA modes to VESA VBE modes, but Mode X can not be improved in this manner. 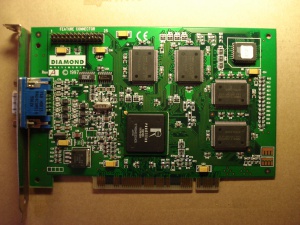 The second generation Vérité chip followed in 1997 and is similar in design to the V1000 but it has been drastically enhanced with a focus on single-cycle operation. V2200 can get much more work done per clock than the V1000 and this improves both 2D and 3D performance. The chip was offered in a budget form as V2100 and a high-end model as V2200 although both are identical and clock speed is the only differentiation. V2100 operates at 40-45 MHz while V2200 is 55-60 MHz. Memory is 4-8 MB SGRAM operating asynchronously, by default usually clocked twice as high as the chip clock. V2x00 is AGP capable but operates as a 66 MHz PCI device, without AGP's special features.

The V2x00 is also capable of 3D rendering in 32-bit color depth.

Unfortunately V2x00 is not able to perform per-pixel mip-mapping (only per-polygon), something even Voodoo 1 could do. Legacy VGA modes are also still very slow. Drivers also tend to be very fickle, with each release offering varying levels of stability and game compatibility.