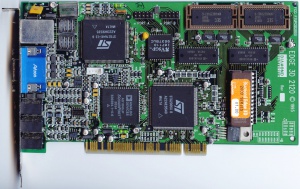 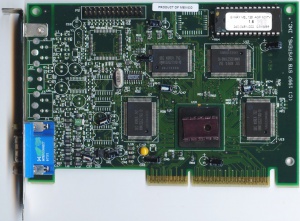 The RIVA 128 was released in late 1997 and it is the first Direct3D compatible GPU from NVIDIA. RIVA stands for Real-time Interactive Video and Animation and 128 for the internal 128-bit pipeline and memory interface. It has a 206 MHz RAMDAC and supports DDC2 and VBE3. RIVA 128 has all the hardware features required for Direct3D 5 and has also good OpenGL compatibility. It renders at only 16-bit color depth. The 3D performance is competitive with Voodoo Graphics (Voodoo1).

The RIVA 128 shows a number of rendering quality compromises. It has blending issues that introduce dithering patterns/noise. Its texture mapping does automatic mipmap generation. This combined with its per-polygon mip mapping causes texture popping and other quirks. The per-pixel mipmapping in the control panel does not operate as true per-pixel mipmapping and can cause problems. It also has some kind of problem maintaining texture alignment and visible gaps often occur. Finally its bilinear texture filtering is not as blurring as you may be used to. Sometimes textures look almost as if they are only point-sampled. Overall RIVA 128 is an interesting mix of speed and compromise.

A special feature of the PCI version of the card is the ability to load textures over the PCI bus, which was advertised as AGP content on PCI. The 2D-features include video scaling and color conversion capabilities. The chip features also PAL/NTSC output so many cards were released with TV-out, some even with TV-in.

In early 1998, NVIDIA refreshed the NV3 architecture by releasing the RIVA 128 ZX. The RIVA 128 ZX is an upgraded chip that has a 250 MHz RAMDAC and supports up to 8 MB SGRAM. For texture intense games the increased memory results in higher performance. Higher resolutions as also supported. The RIVA 128 ZX was also integrated onto Intel's i440BX-based RC440BX motherboard.

Released in 1998, NVIDIA's RIVA TNT is a drastically improved Direct3D 6-compliant GPU with much better image quality and performance compared to its predecessors. It is competitive with Voodoo2 but with more flexibility such as 32-bit color rendering and 1024x1024 texture support. It also supports AGP 2x with execute mode (AGP texturing). 32-bit color rendering comes with a significant speed loss though and large textures are of very limited use since the chip lacks any form of texture compression. 16 MB RAM allows for very high resolutions. Great OpenGL support. All NVIDIA cards have the advantage of seperately clocked memory which makes for more flexible overclocking than with 3dfx cards. Unlike ATI's Rage 128 - one of its main competitors, the RIVA TNT does not support true trilinear filtering, but rather, its trilinear filtering is an approximation implementation. This results in reduced visual quality when viewing textures / MIP levels at far distances (which can be best described as a "sanding" or dither-pattern type effect) when trilinear filtering is enabled, but otherwise the RIVA TNT's visual quality is great. The RIVA TNT was also integrated onto Intel's SR440BX and PowerColor's DREAMCODE motherboards, both of which are based on Intel's i440BX chipset.

Acer Laboratories Inc. (ALi) later integrated the RIVA TNT2 core into the northbridge of their M1631 motherboard chipset, commonly known as the Aladdin TNT2. The Aladdin TNT2 could also use shared system memory (up to 32 MB total) in addition its onboard graphics memory. Most motherboard manufacturers opted to equip it with 8 MB local memory. The Aladdin TNT2 is on par with the TNT2 M64 in gaming performance. 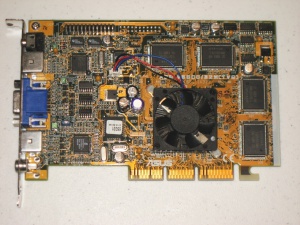 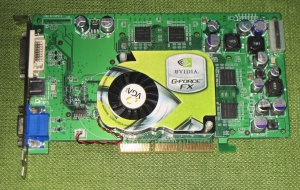