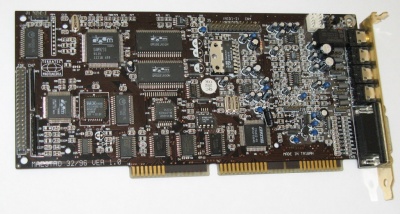 The wavetable consists of the Dream SAM9233/8905 chipset, a 32-voice GeneralMIDI-compatible synthesizer and effects processor. The synthesizer has access to a 4MB ROM sound set stored in two 32MBit chips (GMS931600 and GMS931601). Since the CS4232 codec normally only has one MPU401 (UART) interface, the SAM9233 is connected to the codec via the CDROM interface (named MIDI-1 in the Terratec mixer software). the regular MIDI port of the codec is called "MIDI-2". Both MIDI ports can be routed to the gameport of the card. According to Terratec, MIDI-1 does not support SysEx messages (i.e. it filters them), external devices relying on SysEx have to be connected to MIDI-2 instead.

The card is PnP-compatible and, if fully configured, uses up to three IRQs (codec, MIDI-1, MIDI-2), two DMA channels and six I/O ports. Drivers and manuals are available on the Terratec FTP server.

The DOS driver is included in the Windows 3.1 and Windows 9x driver packages. It is called "TERRATEC.EXE" (MIX3296.EXE in a later driver version) and combines a DOS initialization tool, a mixer and an EEPROM configurator into one application. The newer version MIX3296.EXE may crash on faster systems (Pentium II and above), when the EEPROM configuration is called, the older TERRATEC.EXE should be used in this case instead. Generic DOS drivers for the Crystal chip may also be used, but some of the features of the card (mainly the double MIDI port feature and its routing options) will be unavailable.

The codec itself is compatible with the SoundBlaster Pro and the Windows Sound System. However, if the chip has been used in SBPro mode after initialization, the WSS part will not function properly. The tool CS32WSS.EXE (available with the generic CS4232 drivers) resets the chip and puts it back into WSS mode.

The SBPro compatibility along with built-in OPL3 clone is decent and should work with most DOS games, although the OPL3 clone has a noticably different sound than the original. On faster machines (Pentium 200 and above) some games may expose speed related issues in combination with the CS4232. This can be overcome by the use of a slowdown tool or similar measures.

There are two versions available from Terratec for Windows 9x: version 1.29 and the update 2.5B. The former comes with a set of applications (media rack) while the latter only installs a new mixer application. As with the DOS drivers, generic drivers for the Crystal codec can be used, but the mixer application will not function and the MIDI-1 part will be unavailable. Sometimes the newer driver version may cause problems (blue screens, no wave output) in Windows, the older version should be used instead.