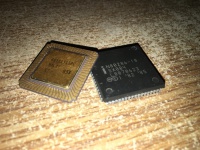 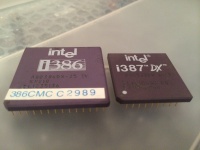 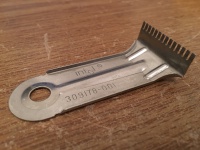 The first generation of intel 486 chips were 5V and made at 1 micron with 8kb of write-through L1 cache. The second generation were normally 0.8 micron. 486DX2s support clock doubling (40,50,66MHz). 486SX has the math coprocessor removed. The 487SX was advertised as a math-coprocessor for a 486SX but was esentially a full blown 486DX with a slightly modified pinout. The third generation of Intel CPUs were 0.6 micron and ran at 3.3V. The 3V version of the 486DX2 retained the 8kb write through cache. The Intel DX4 introduced clock tripling, despite having a name which implies clock quadrupling. Additionally, it sported 16kb writethrough or writeback cache (depending on the model), as well as some ALU enhancements used in Pentium chips. Although the DX4 was only produced in 75 and 100MHz versions, the 100MHz part normally ran about as fast as an am486DX4-120. Intel DX4s had a multiplier jumper and could be set in either 2X or 3X modes. In some cases it is possible run them on a 50MHz bus (in 2X mode). Intel documentation and some motherboards mention support for a 2.5X multiplier setting, however this was removed before the design was finalized. The 2.5X mode was originally meant to be used in a 486DX3-63,83 (2.5X clock) but these were deemed to be unmarketable. 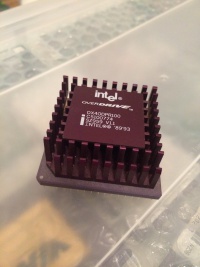 Note that mobile Pentium MMX processors ran at up to 300Mhz speed, however, they had a different core (Tillamook) and usually a different packaging. There are Tillamook Pentiums in the same Socket 7 package as the later Pentium MMX chips, but it's proven difficult to get these running in desktop boards as the system will often not boot correctly without disabling the CPU cache. Possibly these chips can run with it's caches all enabled using a motherboard with Intels own 430TX chipset, but finding details about this is sketchy

The first CPU made available for Slot 1. It featured a 'cassette' containing a small PCB with the CPU die soldered onto it along with 2 cache chips for a total of 512KB of L2 cache. The cache chips ran at half the CPU clock speed though, which was a departure from Intels Pentium Pro where the L2 cache ran at the same speed as the CPU.

The Pentium II was made in 2 different versions. First came the Klamath, running at speeds from 233MHz up to 300MHz. These processors ran fairly hot for their time (up to around 40W), but an interesting fact for someone building a retro rig is the fact that most of these still had their multiplier unlocked. The second version was basically a die-shrinked Klamath, called the Deschutes, which was made in speeds of 266MHz up to 450MHz. The Deschutes is typically the prefered choice over Klamath, mostly because it offers more performance while producing less heat while having virtually no drawbacks except for most Deschutes-based Pentium IIs being multiplier-locked

The Celeron for Slot 1 was the very first Celeron ever made and was designed to fill in the gap created by the introduction of the Pentium II while at the same time Intel left it's budget users with the aging Pentium MMX 233.

2 Celeron cores were made for Slot 1.

The first one was the Covington, which was basically a Pentium II without its cache chips and the lack of any L2 cache had such a bad impact on performance that Intel quickly released a second core, Mendocino, featuring 128KB L2 cache. Only 2 speed grades of Covington were made, running at 266MHz and 300MHz before it was quickly replaced by Intels next Celeron incarnation. Mendocino was made available from 300MHz up to 433MHz when Mendocino moved back to a socketed solution (becoming Socket 370) Even though the Mendocino had only a quarter of the cache of the Pentium II, it ran at full speed instead of Pentium IIs half speed and had performance rather similar to the Pentium II.

The Pentium III was Intels successor of the Pentium II. By this time all Slot 1 CPUs were multiplier locked (except for some engineering samples perhaps). The Slot 1 Pentium IIIs came in 2 different variants. The first one was called Katmai and ran at speeds from 450MHz to 600MHz and this Pentium III was very similar to the Pentium II it was supposed to succeed. The Katmai could be considered a "Pentium II+" as it's main new feature was the addition of SSE instructions. Because the Katmai also had it's cache chips off-die, it still needed to be mounted on a small PCB along with it's cache chips.

The second and final variant of the Slot 1 Pentium IIIs was the Coppermine. The Coppermine featured 256KB on-die cache which was only half the amount of cache the Katmai had, but instead of running at half the speed of the CPU, the Coppermine had it's cache run at full speed, thereby increasing it's performance even though it had only half the cache.

The Coppermines also ran significantly cooler compared to Katmai and because the absence of any off-die cache, Intel quickly moved back to a Socketed solution for Coppermine.

Today: Slot 1 mainboards are a popular base for building a retro rig these days, mostly because of their overall good stability, the good availability of Slot 1 boards and their good compatability with other hardware, their good range of different CPUs which could be set up to running all the way from around 100MHz (when underclocked) all the way to 1400MHz (and possibly even higher when overclocking), their good performance and perhaps mostly because of Intels BX chipset which was made for Slot 1. Also BX boards are relatively easy to set up.

Be wary when mounting a CPU cooler onto a CPU which has an Integrated Heat Spreader, as the taller CPU will make mounting the CPU cooler more difficult and may even cause the tabs on either side of the CPU socket to snap due to the increased force applied by the CPU cooler.