The R300 GPUs are Direct3D 9 graphics chips. They have many improvements and noticeably better visual quality than prior chips. Radeon 9800 Pro is competitive with GeForce FX 5900 Ultra, but with Direct3D 9 games the GeForce FX falls far behind.

Anisotropic is vastly improved, with much lower angle-dependency and the ability to work with trilinear filtering. Anti-aliasing is now performed with 2-6x gamma-corrected rotated-grid multi-sampling anti-aliasing. MSAA operates only on polygon edges, which of course means no anti-aliasing within textures or of transparent textures, but expends far less fillrate and is thus useable at higher resolutions. NVIDIA does not match the quality of this MSAA until GeForce 8. However, ATi did not support any form of super-sampling with R300-R700, while NVIDIA did. 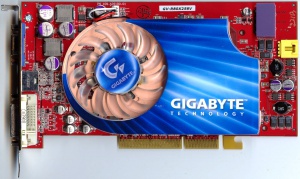 This is ATi's Direct3D 9.0b generation. It is very similar to R300 in general, but with 16 pipelines in the top chip instead of 8, and higher clock speeds. They are still shader model 2.0 GPUs but have some extensions beyond 2.0, which gives them a 2.0b designation, but are not 3.0 compliant. This was not an issue until about 2 years after launch when games started to outright require shader model 3.0 or run without some visual features. There are some games that utilize 2.0b features - for example Oblivion has more visual effects available on X800 than 9800.

A new anti-aliasing mode was introduced, called temporal AA. This feature shifts the sampling pattern on a per-frame basis, if the card can maintain >= 60 fps. This works well with human vision and gives a tangible improvement to anti-aliasing quality. Also, while not initially available, adaptive anti-aliasing was added to the R420 series after the release of R520. Adaptive AA anti-aliases within transparent textures, giving MSAA more SSAA-like capabilities.