3DLabs' first tap into the consumer graphics market was in November 1995 with its Game GLINT (also known as GiGi) chip. It is a scaled-down variant of 3DLabs' GLINT 300TX chipset released a year earlier, which was designed for professional 3D and CAD applications. The only graphics card produced using this chip was Creative Labs' 3D Blaster VLB. It is a unique card in that it is the only existing consumer-level 3D accelerator (and texture mapper) for the VLB bus, and it was designed for 80486 VLB users who wanted Pentium-level gaming performance. It has 1 MB graphics memory for display frame buffer and 1 MB texture memory. The 3D Blaster VLB can be used as a standalone 2D/3D graphics card or as a 3D-only accelerator when paired with a 2D graphics card in the same system through a VGA pass-through cable (in the same manner that cards based on 3Dfx's Voodoo Graphics and Voodoo2 chipsets function). The 3D Blaster VLB supported Creative Labs' own proprietary API known as Creative Graphics Library (CGL). Only a handful of CGL games were ever released (more information here) and only these games take advantage of the 3D Blaster VLB's 3D rendering features. Games that do take advantage of the 3D Blaster VLB usually run in higher resolution (640x400 or 640x480) and with additional graphics detail. However, with these additional rendering features enabled, performance in supported games is less than desirable (unless one has a VLB Pentium system) and reviewers knocked the card. Most gamers at the time opted to upgrade to a PCI Pentium system instead. The 3D Blaster VLB was supplanted several months later by its PCI bus counterpart, the 3D Blaster PCI, which used Rendition's Verite 1000 chip and had better game compatibility and performance.

3DLabs released the Permedia and Permedia NT in 1996, and they served as value-oriented graphics chips designed for the professional 3D and CAD markets. Permedia NT differs from the original in that it features a separate geometry co-processor chip (known as Delta) for performing transformation, clipping and lighting calculations. However, the Delta geometry co-processor is optimized for professional 3D and CAD applications rather than for games, resulting in anemic overall gaming performance. On the upside, the main advantage at the time was that 3DLabs was the only company producing consumer-level graphics chips that had full OpenGL ICD driver support (other manufacturers didn't support OpenGL at all or released a miniport driver instead). 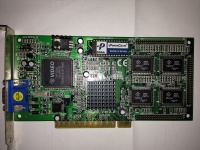 The Permedia 3 and GLINT R3 are the third iterations of 3DLabs' Permedia architecture. Both were released in mid 1999 and again were directed at the professional 3D and CAD application market. The Permedia 3, however, had more emphasis on being directed at gaming. Both are also Direct3D 6-compliant. The Permedia 3 and GLINT R3 are nearly identical to each other, but the GLINT R3 is more optimized for professional 3D and CAD applications as well as multiprocessor systems. At this time 3DLabs began producing their own graphics cards rather than license their graphics chips out to OEMs, in the same manner that 3dfx did with their Voodoo3/4/5 series. The Permedia 3 and GLINT R3 also introduced support for hardware dot product bump mapping, but this feature would not be extensively used in games until a year or so after its release. Other consumer-level graphics cards at the time only supported emboss bump mapping. Three retail cards based on this chip were released: 3DLabs' Permedia 3 Create! (using the Permedia 3 chip), Oxygen VX1 and the Oxygen GVX1 (both using the GLINT R3 chip). The Oxygen VX1 was released in both 32 MB and 16 MB configurations (the latter was designated as the Oxygen VX1-16). The Oxygen GVX1 featured a separate geometry co-processor (known as Gamma G1) chip for performing transformation, clipping and lighting calculations, much in the same manner that the Delta co-processor functioned in the Permedia and Permedia 2 series. Likewise with Delta, the Gamma G1 geometry co-processor is not optimized for games. Gaming performance-wise, the Permedia 3 and GLINT R3 are both slower than even NVIDIA's RIVA TNT (released several months earlier) in most situations, and they are definitely no match for the RIVA TNT2 or 3dfx's Voodoo3. Their performance in professional 3D and CAD applications, however, is much better. The Oxygen GVX1 is slower than NVIDIA's GeForce 256 and Quadro in both games and professional 3D applications, but produces far fewer rendering anomalies in professional 3D applications.

The Permedia 3 and GLINT R3 require Windows 98 or Windows NT 4.0 (or newer). Overall, this chip is definitely not geared towards gaming.